The Elmhurst Community Unit District 205 and Elmhurst Park District have finalized plans for the purchase and sale of the property at 407 W. St Charles Road, commonly known as The Abbey. The $1.6 million deal makes room for the eventual relocation of the Park District’s senior center and a permanent solution for the York High School Transition Center. Both entities have long identified the need for larger space for the respective programs. Closing will take place in February 2021. Learn more about the sale.

As senior programming increases, it will be meeting at Wilder Mansion with the eventual plan to transition to Centennial Park.

The Abbey was established in 1974 by the Elmhurst Park District as a leisure center for active, older, fun-loving adults in the community. In addition to providing a variety of exciting leisure activities for seniors, The Abbey provides social service programs such as financial assistance, income tax preparation, informational seminars, health checks, flu shots and more. In addition, The Abbey is available for evening and weekend rentals.

The Abbey has a long heritage of community, dating back to World War II. During the 1940's, teenagers sought a place to hang out, beyond churches and schools. The building held social events, operated by volunteers and funded by Community Chest (a fundraising organization), for the next 12 years. In November 1952 there was a groundbreaking for the present facility, then known as the "Youth Center," while the dedication was held the following year in October 1953.

The building traded owners in 1964 from the Elmhurst Youth Center, Inc. to the Elmhurst Park District. The name changed shortly after to "The Abbey" in 1967. The teenagers using the building chose the name from a list of eight names because at the time they were seeking a name that implied a coffee house atmosphere. Under the Park District¹s control, the facility has been used primarily for activities and events for community senior citizens since 1974. 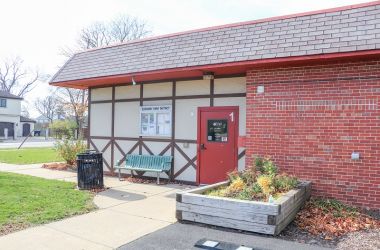 The Abbey is currently closed to the public.