Originally part of the Albert Bucholz farm, 18 acres of land were purchased in 1929. The property was developed in 1936 when the Park Board voted to issue $60,300 in bonds - a portion of the funds was used to construct a pool, a bathhouse, a caretaker's residence, and tennis courts. The community pool had its original grand opening on June 26, 1937. In 1953, the District sold 3.5 acres to the Division of Highways for the building of I-290. Additional Bucholz property was acquired in 1972. That same year, the original tennis courts were replaced with four lighted courts.

In 2006, the 70-year-old East End Pool closed its doors. With a “last splash” and groundbreaking ceremony, patrons took one final swim in East End Pool before construction on the new pool began. On June 2, 2007, the newly built East End Pool once again served Elmhurst, providing a place for community members to swim, splash, and spend their summer days. Concessions are available for pool users. In the fall of 2015, East End Park playground was redeveloped and relocated from the southeast corner to a more centralized area of the park, as the existing playground was very close to the street. The move also allowed the playground to be near the public restrooms. 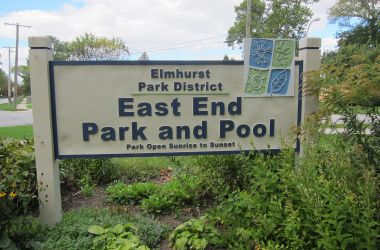