Renovated in 2016, Butterfield Park is home to the Park District's inclusive playground, the Playground for Everyone, which is perfect for children of all abilities.

The original plot of land for this large community park was purchased in 1930 for $16,500 but was not fully developed until 1958. A lighted athletic field was added in 1960. In 1961, the recreation building was completed. Tennis courts were constructed in 1965 and lighting was added in 1971. The park was expanded in 1980 and 1981. The Butterfield Park playground and picnic shelter celebrated its grand opening on June 27, 1998. Over the years, community groups have made improvements to ball field #1 adding baseball dugouts, a scoreboard, and a press box/storage facility for its use during college/youth groups’ baseball season.

In 2016, The Playground for Everyone, the first fully-inclusive playground in Elmhurst, and one of the first in DuPage county, was built. In 2015, with the help and inspiration from Special Kids Day and the People for Elmhurst Parks Foundation, a vision for a different kind of playground emerged and the plans for a 100% accessible playground began—a playground where children of all abilities could play together, which includes state-of-the-art, sensory-rich structures that encourage play for children with mobility challenges and developmental disabilities such as autism, Down syndrome and cerebral palsy.
The $600,000 Playground for Everyone would not have been possible without generous donations totaling $250,000 received from numerous community groups, an online crowd-funding campaign, individual donations and proceeds from the “Be a Kid Again” fundraiser held in February 2016.
Current Size:
24.56 acres 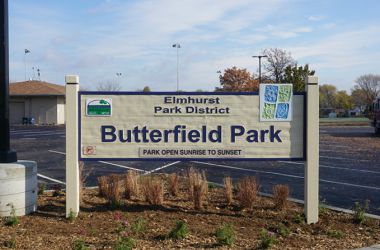