Redeveloped in 2011, the playground features an exciting design to accommodate kids of all ages and abilities.

In a publication of the Elmhurst Centennial Historical Committee in 1936, Wilder Park was described as "Elmhurst`s Prettiest Garden Spot," and "a garden spot as beautiful as any in the Middle West."

Originally a cow pasture, this land was undeveloped, leaving a large open space that could be used as a park. When the Elmhurst Park District was created in the spring of 1920, the District immediately entered into negotiations for the entire Wilder estate, which was purchased for $45,000. When Wilder Park first opened, two bricks and a cathedral of elm trees flanked the entrance. Improvements to the estate, which covered two city blocks, began at the north end. A lily pond, landscaped walkways, and playground equipment was installed. Located in the southwest corner of Wilder Park, near Church Street and Prospect Avenue, is an elaborate series of glass buildings, including a conservatory, two greenhouses, and a growing house. An urn that adorned the Cook County Court House and survived the 1871 Chicago Fire rests near the formal gardens.

In 2011, Wilder Park underwent a major renovation.  The Wilder Park playground was removed, and the non-profit organization Kids Around the World repainted and reconstructed the structures before transporting them to an undeveloped country in need of playgrounds for children, effectively recycling the playground at no cost to the District. 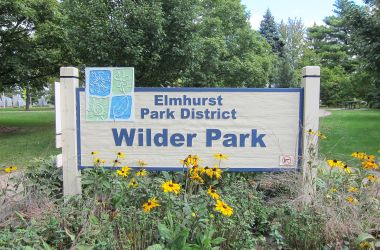