Home to Norman P. Smalley Pool and the Park District Skate Park, the playground features ample seating and shade and an Evos net climbing structure, the first of its kind in Elmhurst, which challenges kids ages 6-12 to use their imaginations.

This area was purchased in 1966 on the property of the former Dramm Greenhouse. Named after York Street, ''common'' was added as a reference to property belonging to or used by the community as a whole. The greenhouses of Eugene Dramm were begun in 1914. Famous for their roses, the business closed in June 1966 and the land was sold to the Park District for $394,000. Development of an outdoor pool on this location began immediately due to population growth, which necessitated a newer facility. The original pool, known as York Commons Pool, was aluminum, with a concrete deck and a diatomaceous earth filtration system.

In 1981, a land exchange occurred with the Fire Department and 2.5 acres were given over for a fire station. In 1999-2000, a major renovation was undertaken to create a new pool with a water park and other services. The project was funded with a $1.4 million grant from the State of Illinois. The pool was named for Norman P. Smalley, in recognition of his long service to the Park District as a trustee and former president. It opened May 27, 2000. At the same dedication ceremony a permanent skateboard park was also opened. This park, for skateboards, in-line skates, and similar sports, provides a facility for active teens.

In 2009, York Commons playground was moved next to the baseball fields so that parents can keep an eye on their younger kids while watching the ball game. 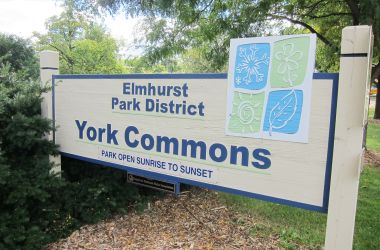