The Community Center houses the Recreation Department offices and Registration Office and is home to many Park District recreation programs including:

The facility was originally Lewis J. Cornille grade school (built in the late 1950s) and was part of School District #3 in Bensenville. In 1974, the school became part of Elmhurst School District #205 but in 1982 was sold to MacCormac College for their suburban campus.

The Elmhurst Park District's Board of Commissioners, in cooperation with MacCormac College Board of Trustees, was pleased to announce the agreement for the purchase of MacCormac College school building and all adjacent college properties contiguous to Berens Park, 615 West Avenue for $3 million. The purchase was finalized on May 30, 2003. On Saturday, September 6, 2003, the Elmhurst Park District opened the Joanne B. Wagner Community Center. Renovations were begun to add meeting rooms, classrooms and office space. A new gymnastic facility was built in January 2004.

The Community Center is named as a tribute to Elmhurst Park District advocate and Park Board Commissioner for 29 years, Joanne B. Wagner. Her tenure as president saw many changes and improvements at the Elmhurst Park District including the construction of Courts Plus, the Sugar Creek Golf Course, and the acquisition of The Abbey, Berens Park, and land along the Prairie Path and Salt Creek.

View a Google Map of this Facility 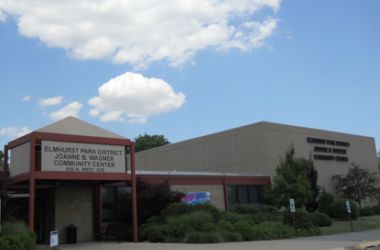