The 'traditional' Funseekers and Courts Plus Summer Camps that many children have enjoyed through the Elmhurst Park District will not be offered this summer.

As always, the health, safety, and well-being of the community is our priority, and the District continues to provide access to parks and facilities according to the State of Illinois Restore Illinois Plan and the Governor’s Stay at Home Orders. Throughout the quarantine, District parks and trails remained open so that people could enjoy the mental and physical health benefits these spaces provide. During Phase 3 of the Plan, the District was able to reopen tennis courts and offer outdoor fitness classes at Courts Plus and Day Camp 2020.

As our region moves to Phase 4: Revitalization on Friday, June 26 under the Restore Illinois Plan, we are excited to announce a number of other openings throughout the District.

Other items to note

The Park District continues to review guidelines to determine the best way to safely serve the community while fulfilling our mission of Enriching lives while having fun! We look forward to seeing you once again at the courts, fields, playgrounds and programs.May 28 Update - Phase 3 reopening update

In accordance with the State of Illinois’ Restore Illinois Plan, staff continues to plan for the return of programming and reopening of facilities as detailed in Phase 3-Recovery, which is set to begin Friday, May 29. We continue to monitor the progress as we move through these phases, and we are prepared to adjust our plan as we get closer to Phase 4-Revitalization.

Below are the details for specific areas of interest:

The Elmhurst Park District looks forward to continuing to reopen and fulfill its mission of Enriching lives while having fun!

In accordance with the State of Illinois’ Restore Illinois Plan, staff continues to plan for the return of programming and reopening of facilities as detailed in Phase 3-Recovery, which is set to begin Friday, May 29. We continue to monitor the progress as we move through these phases, and we are prepared to adjust our plan as we get closer to Phase 4-Revitalization.

With more than 25 outdoor tennis courts, and Courts Plus earning the United States Tenn

Art classes are being offered online by Marie Strauch. There is a small fee for each class of just $8.

Park District pools to remain closed this summer
Posted: May 12, 2020

In light of the COVID-19 pandemic, the Elmhurst Park District will be keeping East End Pool and Smalley Pool closed for the 2020 swim season.

As you’re aware, the stay-at-home order has been extended through the end of May.

The local community focused show, Elmhurst: Our Community featured an interview with our Executive Director, Jim Rogers on their April 27 episode.

Sugar Creek Golf Course is now open for limited play, golf only!  Some of the guidelines set forth by the Illinois Department of Commerce includ

Join our virtual Earth Day Contest & Celebration this week and you'll have a chance to win a $50 gift card to a local restaurant!

Elmhurst Park District has compiled a list of phone numbers, websites & emails that may be useful for seniors & caregivers during the shelter at home order.

After weeks of quarantine, people are starting to feel cooped up and stir crazy. So when the weather warms up and the sun comes out, so do the swarms of people anxious to stretch their legs.

For the most up to date information please see our COVID-19 Frequently Asked Questions page.

Due to the COVID-19 pandemic and the Governor’s extension of the stay-at-home order through April 30, the Elmhurst Park District is rescheduling or canceling a number of events. Refunds will be issued to participants for canceled events that required advanced registration. We will continue to monitor the situation and communicate any further program or event cancellations to participants.

Here is the current status of upcoming events:

Please check our website for event updates and other information about Elmhurst Park District programs and facilities during this current closure.

Our Brain Game program has packets available online of brain teasers to do at home. Keep your brain and cognition healthy with these fun activities!

The public health crisis caused by the COVID-19 pandemic has impacted Park District operations and its ability to provide programs, facilities, and services to the community.

Yesterday we posted a reminder that playgrounds are closed by order of the Governor and that while it’s okay to be in parks to walk, bike or jog, it is not acceptable to be in large groups. Many people chose to disregard the Governor’s order, and we received an abundance of responses from people expressing concern about the volume of people in the parks playing on playgrounds and gathering on athletic fields and courts.

As a result, the Park District is taking further action to highly discourage those people who are ignoring the order by the Governor. Beginning today, “closed” signs will be placed near every playground. Playgrounds will be roped off with caution tape. Rims will be removed from basketball courts. Tennis courts and the skate park will be locked. And soccer and lacrosse goals will be removed from athletic fields.

To do all of those things, we will be asking our staff to leave the safety of their homes and expose themselves to surfaces that have been touched by thousands of people in the last two weeks. Any of whom could be infected.

We are also working cooperatively with the City of Elmhurst and the Elmhurst Police Department, and they are ready to assist with enforcement by dispersing people who do not follow the Governor’s order. Park ambassadors will also be making rounds in the parks. And while they can all try to do their part to disperse people from the playgrounds or push out groups of people on ball fields and courts, their efforts are only temporary until those same people simply return once they’re gone.

All that being said, we implore any of you who took part in the discouraged activity to seriously reconsider your actions. Please do not make us take the next step of closing down the community parks entirely. We want people to be able to get outside to get fresh air and go for a walk, but if this type of blatant disregard for the safety of others continues, we will be forced to do so.

Asking people to stay at home is tough on all of us. But in the words of Simon Sinek, we all must suffer a little so no one has to suffer a lot.

On behalf of the Board of Park Commissioners please take this seriously! Do your part to flatten the curve and save lives!

Due to the recent facility closures we want to inform you of our current plans regarding refunds and credits:

If you have any questions regarding our refund policy, please use the Contact form on our website. We will do our best to respond to you Monday-Friday between 9am-5pm. We thank you for your patience and understanding. We value you as a customer and look forward to serving you again in the near future.

Please note that the above mentioned refund practices are being offered during this special closure and are not our standard policies.

The Elmhurst Park District is committed to ensuring the health and safety of patrons and staff.

Event Update - Based on the rapidly evolving situation with COVID-19 and recommendations from public health officials to limit public gatherings, the Elmhurst Park District is canceling all program 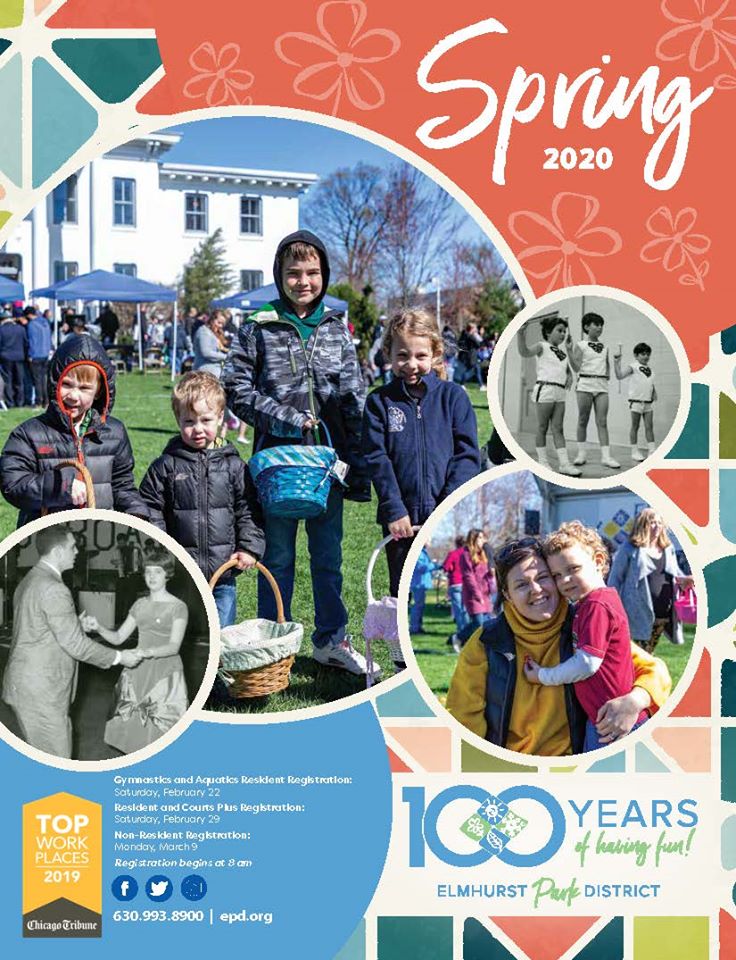 The Spring Brochure is now out for delivery! It features information on spring programs and summer programs, including aquatics and summer camps.

The digital edition of our brochure is available too, viewable here.

Mark your calendar with our upcoming registration dates:

Monday, March 9 at 8 a.m.: Non-Resident Registration for all programs

Community Event Survey - let us know what you think of our events!
Posted: January 19, 2020

The Elmhurst Park District puts on a number of free community events every year, and we’d love to get your feedback on what’s working, how we can continue to improve, and get ideas for future event